As food trucks become more popular, expect food truck lingo to enter the language (much as trucker lingo turned 10-4 into a highly recognized signal for “I received your message”). See how many of these food truck words you already know.

Like gentrification, ventrification has good and bad points. It spurs competition, which is good, but it also makes street food more expensive, which most people would agree is bad.

Pronounced either “B-N-M” or “B and M.” B&M stands for brick-and-mortar. When someone uses in the food truck world, you know that they’re talking about a restaurant. Before food trucks became so popular, people just referred to this places as “restaurants.” Now it’s not that simple. 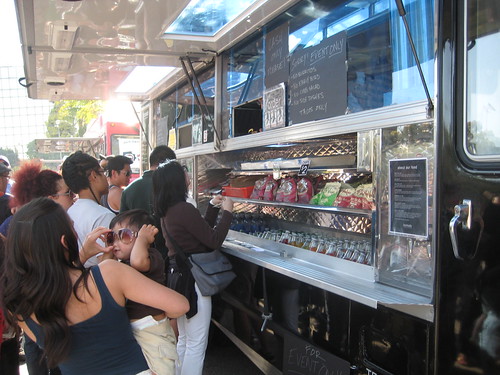 No, this doesn’t refer to anything illegal. It’s a type of Coca-Cola that is served in Mexico. The main difference between Mexican Coke and American Coke is that the Mexican variety contains cane sugar while the American variety uses high-fructose corn syrup.

Some people think that cane sugar is healthier and better tasting than corn syrup. You be the judge. One thing is for sure, Mexican Cokes have become a staple of food truck vendors.

Mexican Coke also comes in a uniquely styled glass bottle. You have to admit that it looks a lot cooler than a red aluminum can.

This word started in Tucson, but it’s slowly making its way across the country as people discover how delicious bacon-wrapped hot dogs are. The word can refer to the type of food truck selling these hot dogs, or the men who sell them. Either way, it means “delicious.”

A type of sriracha sauce made by Huy Fong Foods. The bottle features a large rooster. Sriracha has become the condiment of choice for many food truck aficionados. They put it on everything from burritos to French fries.

They have good reason. Cock sauce is delicious.

It comes in a squirtable, liquefied version that looks like ketchup, but it also comes in a garlic-sriracha version that needs a spoon. Either way, it makes a great accompaniment to foods from all over the world.

In the food truck world, “spot” almost exclusively refers to a parking spot. How one gets a parking spot for a food truck depends on city codes. Some cities have a “first-come first-serve” policy. Others have a lottery that randomly assigns street locations to food trucks.

So, are you a food truck junkie or a total newbie? Do you have other food truck words that will soon become a part of everyday language? Maybe you’re a few steps ahead of the public.