6 Best Cities For Your Food Truck

If you want to start a food truck, consider one of these cities. They’ve become the top destinations for great street food.

New York City has had street vendors for decades. How else would a busy Manhattanite grab a hot dog between meetings?

Recently, though, food trucks have taken New York’s street-side dining in a gourmet direction. Everywhere from SoHo to Brooklyn Heights, you can find exquisite food trucks with unique menus.

Thanks to New York’s large population of adventurous eaters, food trucks have flourished throughout the city. If you own a food truck, it’s a great place to establish your business.

Some say that food trucks started in Los Angeles. Considering that King Taco has been operating its East LA taco truck since 1974,

Today, food trucks offer much more than tacos (although you should never skip a good taco or burrito while visiting southern California). An increasingly diverse group of food trucks has flooded the city because people want to try new foods.

Granted, LA does have a few confusing laws about food truck regulation, especially when it comes to parking in certain areas of the city. If you can navigate the red tape, though, you can find the same level of success as food trucks like:

Austin is one of the few Texas cities that attracts hipsters from all over the country. It’s a cool town that offers a lot of fun things to do. It’s thriving music and bar scene (not to mention the gigantic conferences that have latched on to SXSW) also make it a magnet for good food trucks.

If you’re taking your food truck to Austin, then you need to know about your competition. Some top contenders for the city’s best food trucks include: 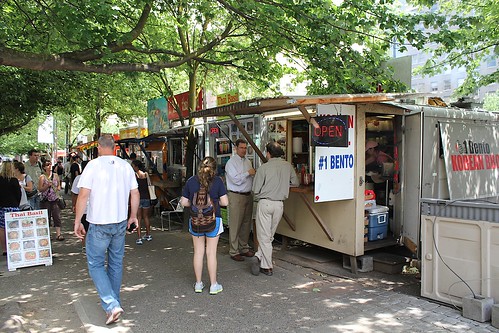 Everyone knows that Portland, OR is today’s hipster capital of the United States. When your high school dreams died, they all moved to Portland. Today, those dreams are living cooler lives in an awesome city that’s progressive in every way imaginable.

Not surprisingly, you’ll even find some food vendors that avoid the typical truck in favor of eco-friendly bicycles.

When you want the best street food in Portland, look for:

Miami has everything a new food truck owner could want: a big population, plenty of tourists (over 13 million of them), awesome nightlife, and an outdoor season that never shuts down to cold weather (although you might have to flee the occasional tropical storm).

Everything about Miami has a hint of Latin flavor. That goes for the food trucks as much as everything else. You’ll also find a handful of food trucks serving their versions of Southern cooking and BBQ.

If you head to Miami to check out the competition, you’ll want to track down:

For instance, you can’t cook any food in your truck unless you have a special license. Considering that only one or two trucks actually have this special license, it’s probably not easy to get one. That’s why most vendors prepare food offsite. They just use their trucks and carts as places to sell. (Before 2012, you couldn’t even get a license to cook inside your truck, so count yourself lucky that the city has at least become a little more reasonable.)

So, why would anyone bother with Chicago’s crazy rules?

Chicago is the biggest city in the Mid-West, so it’s worth doing business there. It attracts all kinds of people; has a wide range of neighborhoods; and attracts plenty of visitors.

If you’re tough enough, you can make it in Chicago. But it will test you.