State fairs often offer the best and worst of what a state represents. When you focus on food, though, you have to visit these four incredibly popular state fairs. They have some of the best in the country. 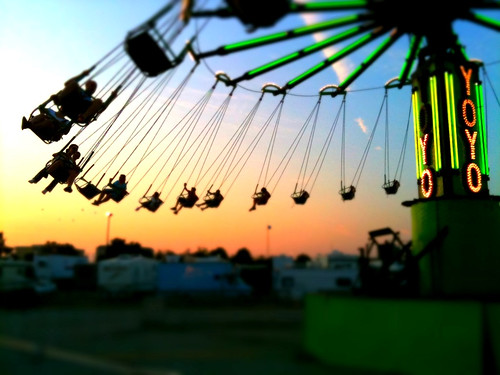 The Kentucky State Fair in Louisville has a central location attracts people from all over the state as well as Indiana, Ohio, and Tennessee. It’s a huge regional event that features all manner of contests, entertainment, and rides.

And then there’s the food.

When it comes to adventurous eating, people at the Kentucky State Fair have no fear. They’ve been chomping away all manner of deep-fried goodies for years. One local favorite includes a hamburger with a donut for a bun. Deep-fried Twinkies have also become a tradition of sorts. If you don’t leave the fairgrounds feeling a little ill, then you need to go back for another round.

This past year, the Kentucky State Fair opened its grounds to a fleet of local food trucks that served more than the standard grub. Some local favorites included:

The food trucks might bring a higher level of cuisine to the Kentucky State Fair, but they still have to compete with vendors selling staples like corndogs and donut hamburgers. Given the delicious nature of fried foods, those gourmet food trucks really have to impress visitors to attract business.

2. The State Fair of Texas in Dallas, TX

They do everything big in Texas, so they go all out when it’s time for the state fair.

The State Fair of Texas has the pop stars and rodeos that you would expect of the Longhorn State. It features a football game, a garden show, an auto show, and a livestock competition. It’s also known as the Fried Food Capital of Texas. Basically, you get everything that you could possible expect from Texas.

Just because the fair has tons of fried foods designed to enlighten your taste buds while hardening your arteries doesn’t mean that you can’t find upscale food there, too. In 2012, the fair added food trucks that serve healthy alternatives to typical fairground snacks.

The Minnesota State Fair in St. Paul might attract more visitors than any other state fair in the country. In 2012, the fair had 1.8 million visitors. That’s an awful lot of people to entertain and feed. The 2012 fair fell just a little below that, proving that the state can pull in more people than any other location.

That’s OK because Minnesota is always ready for the challenge.

Some highlights of the fair include animal exhibits, stadium concerts, a talent contest, and the Milk Run 5k Race. But let’s not forget the excellent food available in the St. Paul area. Minnesota has never been the kind of state to skimp on food, so you know the state fair has to live up that expectation.

Minnesota is the home of food on a stick. If you think you can skewer it, someone in Minnesota has already worked out the details.

The Minneapolis-St. Paul area has also earned a reputation for fresh, organic foods sold through farmers markets and local food trucks. Put all of these things together, and you get one delicious event.

Some of the area’s most popular food trucks include:

You never know which food trucks will come to the state fair, so always check to see if your favorite will attend. Then again, going to the fair blind could lead you to a new favorite or introduce you to foods made from a truck outside of the Twin Cities area.

The Wisconsin State Fair attracts over 900,000 people per year. That’s half the number that Minnesota gets, but it’s still one of the biggest state fairs in the county.

Some of the highlights of the Wisconsin State Fair include eating contests, live performances by national and international bands, and the livestock competitions that you could expect from a state that choose the dairy cow as its state domesticated animal (the badger, which is fully undomesticated, is the actual state animal).

Wisconsin loves cheese, so it makes sense that one of the best food trucks at the state fair makes a heavenly slice of gourmet pizza. Streetza’s top-rated slice includes four types of cheese, tomato sauce, and corn dog slices.

Yeah, it’s a heart attack in the palm of your hand, but it’s also one of the most delicious things that you will ever eat.

Not all food trucks at the Wisconsin State Fair want to weigh you down like Streetza (although you’re a little foolish if you don’t try a slice at least once). Some newer, healthier trucks in the area include:

Which fair do you plan to visit this year with your food truck? You could introduce your recipes to a whole new city. Share your experiences and comments in the thread below.